"Kofte" is a common name that is used for meatballs in Turkey. Almost every city in Turkey has its own kofte dish named after them such as "Izmir Kofte" or "Tekirdag Kofte". Inegol Kofte is originated from the Balkans and brought to Inegol by an immigrant in the late 19th century. It then became quite popular in the 1930s and quickly spread all over the country.

The main characteristic of Inegol Kofte is that it doesn't contain any spices or seasoning apart from salt, which makes it child-friendly. These soft and juicy meatballs are best when grilled on the BBQ but you can also cook them in the oven or on a skillet. They are typically served with Piyaz (Turkish Bean Salad) in the restaurants but also go great with my Tabbouleh Salad.

Inegol Kofte is very easy to make but it requires overnight marinating after the first stage of preparation. You need to rest it for a further few hours after shaping them. It might take some time to prepare these soft and juicy meatballs but the result is definitely worth it. They will be your favorite in no time. This recipe makes around 30-32 meatballs. You can half the recipe or store them in your freezer for up to 3 months if that's too many for you.

How to Make Inegol Kofte?

This is a straightforward recipe to follow. However, to achieve the best results you need to follow a few simple steps:

I hope you enjoy the process of making these delicious and juicy Inegol Koftes as much as you enjoy eating them!🙂 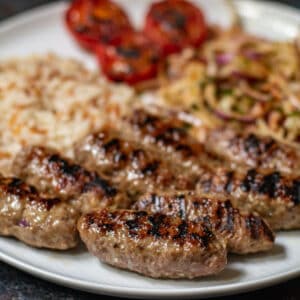