Spinach Borek (Ispanakli Borek) is a delicious Turkish pastry made of thin flaky dough called "yufka" filled with spinach and onions. Anyone who has visited Turkey probably came across with some kind of a borek. They are the most popular breakfast item or a snack on the go!

In the old days, our grandmothers used to make yufka sheets at home to make borek, but luckily you can easily find yufka sheets in food stores or online. In Turkey, there are still some small yufka shops that only make fresh yufka sheets.

Like Pogaca (Turkish Buns), borek is also widely available in pastry shops and they come with different shapes and fillings. Cheese, spinach, potatoes, or meat are the most popular fillings for boreks, but spinach borek is probably my favourite among them. You can add cheese (Spinach and Feta Borek) or mince (Borek with Meat and Spinach) to spinach filling for extra flavour and make it even more exciting!

Why This Recipe Works?

How to Make Rolled Spinach Borek?

Making Spinach Borek is easy but it requires some time and patience. To achieve the best results, you need to follow a few simple steps:

Cut the yufka into quarters. You will have 4 large triangles. Take one of the triangles and roll it starting from the large side into a long sausage shape. Swirl the long sausage into a rose shape, tuck the loose end piece underneath the rose.

Repeat the same for the rest of the yufka pieces. Place the boreks on a baking tray and brush with melted butter and egg yolk. Sprinkle on sesame seeds or nigella seeds.

Place the tray in the oven and cook boreks for 40 minutes or until golden brown.

Can you freeze borek?

Yes, You can freeze these delicious pastries before or after baking and keep them in the freezer for up to 3 months. You don't need to defrost them before reheating. Simply place them in preheated oven and cook them until golden brown or reheat them until piping hot.

What to serve with borek?

The most common way to serve borek is with a cup of Turkish tea. You can also serve these crispy Turkish pastries with a bowl of soup such as Ezogelin Soup or Turkish Lentil Soup and some healthy salad such as Tomato and Walnut Salad (Gavurdagi Salatasi) or colourful Summer Chickpea Salad.

What are the most popular borek variations?

Tepsi Boregi (Trayed borek) - Tepsi boregi is one of the most common ones. Simply layer yufka sheets and filling on a tray and scatter the sauce between the layers. Brush the top layer with butter for crispiness and egg-wash for lovely golden brown colour. Then bake it in the oven until nice and crispy outside and soft inside.
Kol boregi (Arm borek) - Kol boregi is shaped in long rolls and named after their arm-shaped appearance. It is filled and rolled in a similar way to rose borek but shaped like an arm instead of a rose.
Turkish Cheese Rolls (Sigara boregi)– Sigara borek is shaped like a cigarette and is usually filled with cheese or mince filling. Sigara böreği is deep fried and served as an appetiser or meze.

Where to buy yufka from?

The quality of yufka is the key to a good borek. You can easily find them in Turkish or Middle Eastern shops as well as online. Make sure they are not vacuum-packed, buy the ones that say " fresh yufka" which can usually be found where they sell dairy products.

For other delicious Turkish pastry recipes, why not try:

Top Tip From the Chef

Make sure the oven is heated to 180°C (fan oven) before you put the borek in. A cold oven would cause a longer cooking time and less crispy pastries.

I hope you enjoy the process of making this delicious Turkish Borek with Spinach as much as you enjoy eating it! 🙂 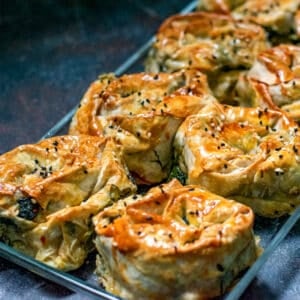 For the Spinach Filling