These delicious vegetarian Turkish Stuffed Peppers (Biber Dolmasi) are filled with aromatic stuffing made of rice, onions, pine nuts, currants, and various herbs/spices. You can serve them as a side dish as well as the main meal or an appetizer. The leftovers are great for boxed lunch the next day or a picnic.

Stuffed vegetables (which is translated as "dolma") are very popular in Turkey. There are various recipes for the stuffing; some recipes include meat and some recipes replace the rice with bulgur. The other vegetables often used for dolma are tomatoes, courgettes, onions, wine leaves, and aubergines.

Why This Recipe Works?

This is a straightforward recipe to follow. However, to achieve the best results you need to follow a few simple steps:

Place a medium-size saucepan on low heat and add olive oil along with the onions. Gently sauté them until soft and translucent and then add the pine nuts. Sauté together on low heat with the onions until lightly golden, stirring occasionally.

Add the rice along with the blackcurrants and cook for a few minutes. Stir in the lemon juice, ½ cup of water, cinnamon, freshly ground black pepper, paprika, dried mint, sugar, salt and tomato paste, and cover the pan with a lid.

Cook until the water evaporates, take the pan off the heat then add the parsley along with the dill. The rice will continue cooking with the peppers so it's ok if they are still crunchy. Give the mixture a stir and let it cool down for 10 minutes before stuffing the peppers.

You can prepare the peppers while the onions are slowly cooking. Cut off the stalks of the peppers gently and scoop out the seeds. Wash your peppers and lightly season with salt. Set aside until the filling is ready.

Stuff the Peppers and Cook

When the filling cooled down a bit, stuff the peppers with rice filling up to ⅔ only as the rice will swell when cooked. Don't push the filling down or overfill the peppers. Put a cherry tomato on each pepper and place the peppers upright in a saucepan tightly. Dilute the tomato paste in water and add to the pan. Cook on low heat for 30 minutes or until the rice is soft.

For more scrumptious vegetarian dishes why not try:

What peppers are used in Turkish food?

The most common pepper used in Turkish cooking is called "sivri biber". It has a long shape and is usually spicy-hot. It is perfect for grilling, frying or using in stews.
Another common pepper that I use for Turkish recipes is called "carliston". It is a mild pepper with a lime green colour. They can grow the size about 20 cm long and 4 cm wide. They are perfect for deep frying and serving with yoghurt or for salads!
And lastly, "dolmalik biber" with a rich smoky-sweet flavour and thin skin which makes them more pleasant to eat. These small green bell peppers are ideal for stuffing.

What do you eat with Biber Dolmasi - Turkish Stuffed Peppers?

You can serve these delicious peppers with some garlicky yoghurt and a piece of bread as a meal. Some bread recipes you might enjoy having with your dolma are:
Tawa Naan with Garlic, Gozleme (Turkish Pancakes), Homemade Toast Bread, Bazlama (Turkish Bread) and Homemade Pita Bread.
Dolma is also great to serve with salads such as Greek Cucumber Salad, Summer Chickpea Salad, Warm Austrian Potato Salad or Piyaz (Turkish Bean Salad).

Do you have to cook peppers before stuffing?

No, you can and should stuff the peppers without cooking them first. They will cook at the same time as the rice stuffing cooks.

Top Tips From the Chef

I hope you enjoy the process of making these delicious Vegetarian Stuffed Peppers as much as you enjoy eating them!🙂 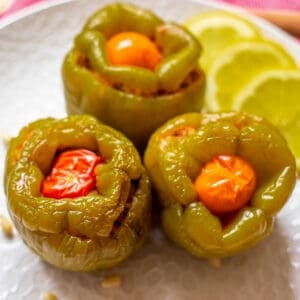 In Turkish culture, food is at the centre of every gathering: religious holidays, birthdays, celebrations, funerals and the list goes on. So, probably like many others, I love food. And not just the food itself, but also the process of preparing the food fascinated me from a very young age.